Since I am not 100% sure which number we are on, we'll say that the last one was 28. I would only be off by 1 if I am wrong anyway. Lesson 26 was an AMAZING lesson. In that lesson, we worked on getting Mia forward, soft, and working. Through the winter, we have done all sorts of new things. Really focusing on the shoulder in at all gaits, developing a true medium trot, 10m circles in the canter, canter/walk transitions, even some baby passage steps! Lesson 26 showed what Mia could be as a big, bad dressage horse and I don't have any media from it! We actually felt like we knew what we were doing and it was amazing. 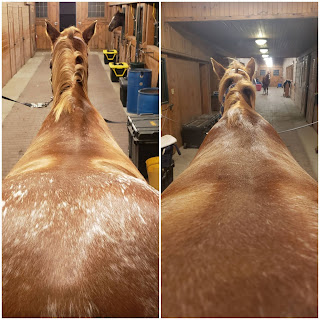 Mia's topline change from Mar 2020 to Jan 2021. Beefy!
Lesson 27 was okay at best. There were a lot of interruptions, I was trying to get video with the Pivo but it kept following the other rider who was not being respectful of my lesson. There was lots of talking with others and lots of breaks, it was frustrating got me after coming off of such an amazing lesson 26. I was pumped up, wanting amazing, cool things on video and instead it was a hodgepodge of stuff and I didn't feel we were super successful at much. We did, however, talk about the upcoming show on Apr 25 and are now starting to work only on elements of the test to really fix some of the weak areas of it. 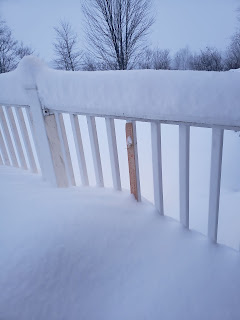 So much snow. All winter long.

Lesson 28 was all about elements of the test that we need to work on. The two biggest problem areas of the test are the 10m half circles of trot at the beginning and the canter/canter lengthenings. I am very happy to say that it turns out I knew how to fix the canter lengthening to canter transition problem, I just didn't realize it! The issue is that Mia throws her haunches in during this transition, way more than she throws her haunches in normally. While this past year has made her canter be straight 80% of the time, this transition will always bring her haunches in to an extreme. The solution? Shoulder in during the transition. It sounds super easy, sometimes it is/sometimes it isn't, but it is working! With our new-over-the-winter ability to do canter in a shoulder in, doing it in the transition is now possible and works to keep Mia's haunches where they belong. Win! 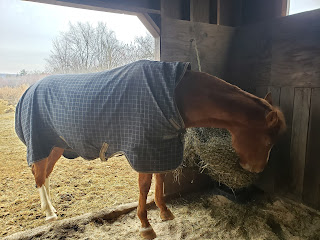 Hay where it belongs, in a net!

The other weak area? Our 10m half circles of trot. After entering down the centerline, you turn left. At E, there is a 10m half circle, changing direction at X to do a 10m half circle to B. The first circle is always fine, the second circle to the right is always bad. It is off of Mia's bad side and off of my bad leg that Mia ignores, we almost never get a nice, round circle. It is my homework to really work on the right circle, so fingers crossed. I have a bunch of tricks to play with to find what will work best. Luckily, the rest of the test I am pretty confident about. Under A's direction, we have made tremendous improvements in all aspects of our test and there are times that I ACTUALLY feel like we are a serious contender in dressage. A wants, and expects, us to get a score in the 20's (OMG), I'll be happy with low 30's. 20's? I can't even.... That is an App score, not a Mia score! 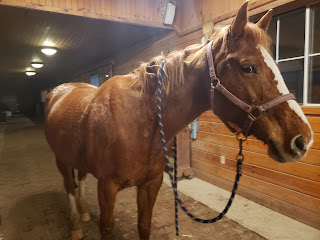 Sweaty mare is a happy mare

Yesterday I jumped real jumps for the first time since lesson 18 in October. I've gone over cavelletti for a few rides to help strengthen her ligaments, but this was the first jumping I've done and it was done outside. While super duper forward, at times way too much so, Mia was very good. She refused to actually jump the 18" crossrails and would only trot them, so I had the 3 jumps as an 18", 2', and 2'3" verticals. We did lots of bending lines, angles, and jumping with adjustability in our striding with these 3 jumps! At the end, I even went over some of the small to medium XC logs which Mia absolutely loved. She turned her power up to 100% for those jumps, there is zero chance A would have yelled at me to get more power from her! HA! 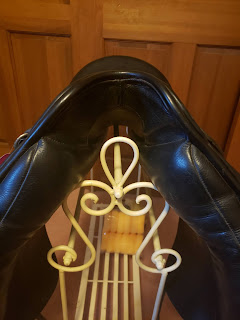 That's not what you want to see on your new saddle 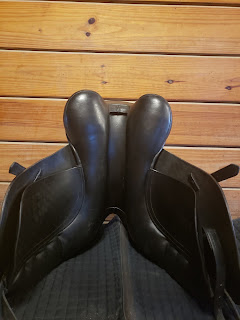 Using the lines on the wall as a guide, that left panel is not right

In other news, the first saddle I had on trial was a big fat no. The tree was twisted. The left panel was almost 3/4 of an inch back further and down more than the right panel and they were of very different shapes. I had seen it immediately on the pommel, but it was even more obvious when you looked underneath. Boo! I have an 18" coming tomorrow. It is a 2008 like my current saddle, but supposed to still be in almost demo condition. Fingers crossed this one works!

Posted by appydoesdressage at 6:36 AM