Getting our dressage on - a partial update

Last Saturday was our first lesson and wow it was a good one. We started the lesson as expected, with some background. The instructor, M, said that she remembered us after she saw Mia and again said how much she liked my mare.  Mia was nicely put together and moves very well.  M immediately had me lower my stirrups which made her happier and though didn't necessarily feel better, I am paying for her opinion so I sure in hell am going to try it out! She really liked my basic position.  My leg was nice, my hands were nice, my back was nice and straight.  But then she started to nit pick.  I need to close my hip angle, apparently I am slightly behind her motion right now which is fine for a more upper level horse but not for my green bean.  I FEEL like I am leaning way forward but she says I look perfect so I am working on it.  She also had me stop looking where I am going and, if anything, counter bed a little because I am turned too much to the inside.

Okay, so that was the write up I started 2 weeks ago and still haven't had time to finish.  Still.  So that is it for now, I have a lesson tomorrow again and I SHOULD have time to make a post about it because I am actually off of work until January starting tomorrow.  YAY!!!  Sorry for being such a bad blogger, I guess some update is better than none?  I have been practicing my new positions and they are coming along very well, hopefully M will see continued progress and I will be awesome come spring.
Posted by appydoesdressage at 12:42 PM 1 comment:

Oh geez, I really don't have time to post, I haven't even written about my last lesson(!!), and yet here I am going to try to do a dang blog hop.  Well, hopefully it goes okay enough. 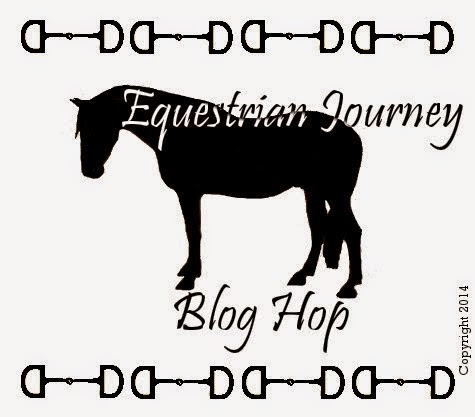 First - What Will You Not Do?

Achieve1dream asks “We all like to share on our blogs what we do with our horses and what we would like to do, but I want to know what you will NOT do.”

Well, I won't do things that are not in the interest of the horse.  I will not overwork them, I will not be unreasonable in my expectation.  I will not use gimmicks to train my horses.  I will not teach them dangerous tricks like rearing or striking.  I will not allow my horses to be free of consequences of their actions :)

Achieve1dream asks "Do you have any winter tips to share?"

I have tips, not sure how helpful they can be.

I strongly recommend slow feed hay nets for feeding hay.  Why?  It eliminates 95% any and all waste that is attempted by Appy.  He has no reservations about peeing and pooping on the hay and then being hungry and threatening to lose weight.  The slow feed hay nets eliminated all of that.

For pelleted bedding, fill a 2.5 or 5 gallon water jug that you find in water coolers (avail for under $10 at Walmart) with hot water.  Open a bag of pellets in a wheelbarrow by cutting 3 sides of the bag so that it becomes a sheet of plastic.    Dump 2-2.5 gallons of hot water over the pellets.  Cover the pellets with the bag/sheet of plastic and leave for 5 mins.  It will steam the pellets and within 5 mins you will have fluffy bedding and no pellets.

If you don't have a water heater, surround your tank with foam insulation (or any kind of insulation).  Then take an aquarium bubbler/air pump, attach an aquarium air hose to the bubbler and the other end to a rock or other piece of semi-heavy thing and place in the bucket.  The foam will reduce the time the ice forms on the side of the tank/bucket and the bubbler will keep the top from freezing over.  Note, bigger tank needs bigger bubbler.

Scoop as much frozen poo as possible, especially if it is on gravel.  What you may think is deep muck can very likely be 2-5 inches (or more) of poo slop and the gravel will still be hard packed and dry underneath.  The more poo you scoop, the less mud you will encounter.

Hope this helps someone, those are the best winter tips I have!  Let's see how long I can keep up the blog hops :)

Email ThisBlogThis!Share to TwitterShare to FacebookShare to Pinterest
Labels: EJBH

Achieve1dream asked a question of my last post, since I love comments and don't want to discourage them, let me answer!

Anyway, I rode Mia again on Friday with a saddle and she was MUCH better.  She started out fighting at the canter but I went back to the positive reinforcement training we did when I was breaking her out, as soon as she did what I wanted I would make a noise and give her a treat.  This gal is SO food motivated, it took only 4 times before she was cantering with her head below her chest.  HA!  Silly horse.  Definitely shows it wasn't a pain or training issue, dang baby horses.  The ride went fabulously so I kept it really short.  We did some shoulder in, haunches in, some baby half passes, lots of transitions and then called it a night.

On Sunday RB4 came out and I jumped Mia on a small grid and man that girl can jump.  I had 3 trot poles to a 2' placement jump and started by making the oxer wide.  We got the oxer to 2'6" high and almost 5' wide before we narrowed it and raised it up.  When we went to 2'6" to 2'9" I couldn't even tell there was a height change!  She is drifting to the right a lot, I am not sure if it is my leg (or lack there of) or her though.  I rode with a crop for most of the ride and only had to smack her a couple of times the entire ride to get more impulsion, one smack at a time is all she needs to wake up and go!  When we put it up to a 3' oxer I swear she was jumping a 2' jump, it felt SO easy and relaxed without any of the knocking down issues we were having this summer.  Mia only knocked the fence down a single time when she drifted to the right so far that she knocked the standard down with her front hoof, from there on I carried the whip in my right hand and used more leg and kept her semi-straight.  Go Mia!

Tuesday I rode the App for the first time in a while, he is just SO damn good when he wants to be.  I was showing K some of the training he actually has, she has heard me talk about some of the stuff we used to do and while I don't think she doubted me, I think she just couldn't imagine him actually doing anything fancy since he is such an out of shape old man.  BUT we were able to do full half passes, travers, renvers, 5 meter circles in the trot, half passes in the canter and he was even able to really sit down and do an almost 5 meter circle at the canter!  Awww Appy <3  We did 3 stride tempi changes, walk/canter/walk transitions and even halt/canter/walk transitions.  I really opened him up in the canter when K asked if he always cantered that slow (uhhhh, NO!) and was able to bring him back without too much of a fight.  It was obvious that App doesn't have the muscle anymore and I didn't make him do any one movement for more than a 30 seconds at a time.  It was so nice to ride him :D  K offered to ride him for extra exercise and I am gladly taking her up on it, maybe I can get his muscling back up and he will look like a young teenager again.  He certainly doesn't look like a 21 year old horse but he is certainly showing his age with his lack of muscling.

Finally, I have an update.  A fairly cool update.  Actually 2 of them!  First, I scheduled my first dressage lesson since last winter!  I am using someone else, not H, and she is 35% more expensive than H (YOWSERS!) but I rode with her in a clinic that I had brought Mia to in the spring and we had a really good ride so I am hoping I will get some serious progress.  This lady, M, is a dressage trainer that has a bunch of USDF certifications, I am hoping she can get my equitation fixed once and for all and Mia and I can move forward with a plan because I am currently stuck in a dressage rut.  My lesson is Saturday, wish me luck!  Secondly, my NEW TRUCK is going to be here the week before Christmas!! EEEEEE I am SO excited!
Posted by appydoesdressage at 8:00 AM 1 comment: