There was an overwhelming request for a photo dump, so...okay!


When we got back to the barn, I applied hoof treatment to App and when walking by, he stuck his head in the trailer.  I asked him if he really wanted to hop on the trailer, he actually did!  Weird right?  He hasn't willing hopped into a trailer, like, every?  Let alone wanted to.  Ha!

He is doing decently enough.  He is holding his weight very well though he is pretty uncomfortable.  His left shoulder causes him a lot of pain, even though he is on a lot of drugs.  It is all about managing his pain levels and trying to make sure he is sort of limping instead of really limping.  It's tough seeing him as uncomfortable as he is 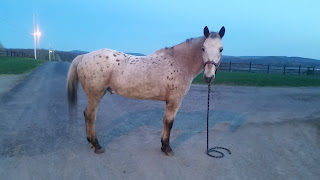 He is currently on Equioxx and Gabapentin for arthritis pain, Pentasan and MSM for inflammation, Polyglycan for the joint fluid that is left and Buteless Pellets.  I am hopeful this isn't the last year with him :( but he is still happy and love attention so I am doing what I can for him 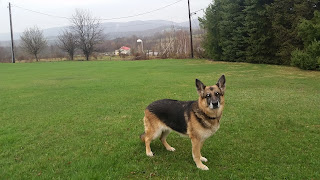 And finally, this girl turned 11.  She doesn't go along for trail rides anymore, nor chase the ball for more than a throw or two, but we have her separation anxiety mostly under control, she hangs out at the barn when I go and she is much happier than she was after we first moved to PA.  That is a win.
Posted by appydoesdressage at 8:32 AM 5 comments:

Things have been really busy here, thus the lack of updates.  Blah.  Last week was prep for our show, Monday wasn't a good dressage ride and there were lots of arguments.  Tuesday was fantastic and Wednesday we jumped and Mia was an angel.  We jumped 3'3" and she acted like they were 2'.  Jumping from a trot, coming back after the fence?  Holy crap, she did it all!  On Saturday, Mia was pretty decent in our last dressage ride until the canter where she insisted that a canter/trot transition didn't exist and that she also needed to bolt in the canter.  Well, at least we had this discussion before the show!

On Sunday Mia loaded right up without hesitation (WOOHOO!!  One day I won't wonder if she will balk at loading haha) and we made the 2+ hour trip to the show.  She was nice and calm and happy.  We warmed up in the grass by the dressage arena instead of in the sand warm up ring which was "over the hill" and Mia was awesome.  Very soft, very light, responsive off of my leg and so awesome.  I was very excited about our dressage test!  We went to the ring and Mia immediately stiffened up, she was not at all comfortable on the substrate in that ring.  It was a large, course sand-ish material with large rubber pieces mixed in and she didn't like it at all.  She became tense and hesitant to move forward as we walked around the perimeter of the ring and didn't get much better even after I pushed her forward.  Damn it all!

Our test rode okay enough, our canter was actually decent (with a 7 on our left canter!!) but the entire test had remarks that she was stiff and not bending through her body.  We got lots of 6.5-7's and a few 6's, so I can't be that upset with the ride, but there were 3 people who had mid to low 20's scores and we couldn't compete with that when she was footsore.  We were 4th after dressage.  We had a 2+ hour break until stadium so we went back to the trailer.  Guess what happened when we got back?  Stacey and Klein parked right next to us!  Holy crap!  I HAD to go over and introduce myself and, of course, bring a peace offering of a granola bar for Klein.  Stacey was so nice and seemed to enjoy having someone to talk to at the show, she was there by herself because her hubby is deployed.  I had no problem keeping her company haha!

In no time at all, it was time for stadium.  At 20 mins prior, I walked in the warmup, trotted a lap, trotted the x rail, cantered the vertical and cantered the oxer.  Mia tried to take off over the oxer, taking a very long spot, knocking the back rail down and it seemed to have hurt when she hit haha.  I represented her and she listened and went over it with plenty of clearance the following 3 times.  Pick up your feet Mia!  I walked over and hung out with the rest of my class who were hanging out.  As they got ready to start the class, about 15 mins later, I went back and popped over everything.  Mia was so adjustable that so I called it quits and just hung out and waited.

We went in the ring and it was almost like I was in the twilight zone.  I sat up and back and you know what Mia did?  She slowed down.  We went over a fence and you know what she did?  She jumped it while being balanced!  I added leg to avoid a long spot, you know what she did?  SHE LENGTHENED.  And then?!?!  SHE CAME BACK TO ME!  OMG.  I am not sure I can adequately convey the shock and awe I felt over her agreeing to be my partner and not only listening but also applying the training I have been putting into her.  She didn't speed up a single time.  Do you have any idea how rare that is??  It is so extremely rare.... and to do it at a show?!  OMG Love!  Mia not only jumped 2'11" like it was two foot, jumping way higher in several instances, she was the only horse in my division that went double clear.  Wow.  Just wow.  We ended up 3rd in our division but I feel like we were a first place winner with her stadium round.  I was, and still am, so, so, so, SO happy.
The final piece about our show?  I fricken love my new saddle.  I had no idea I could possibly ride as well as I did.  I am super serious, it is like my saddle says "stay here" and so my body just does.  I loved my Stubben, and would recommend it as it made me a great rider, but I am seriously appreciating the help my new saddle gives.  Every single picture of us jumping looks amazing.  I hope to have pics in the next few days, no one would mind a photo dump, right?  Ha!
Posted by appydoesdressage at 11:09 AM 6 comments: