A thank you to Hillary and Houston! Secret blogger gift reveal

I am such a bad, bad blogger, I did not get this up before Christmas.  To my defense, we didn't have power from Saturday night until JUST NOW and I can't seem to use blogger on my phone but I am still sorry that I didn't get it up when I should have.

Tracy over at Fly On Over hosted a Secret Blogger Gift Exchange.  I got Karen from Bakersfield Dressage and I was lucky enough to have gotten Hillary and Houston.  I hadn't ever read their blog before but I am now!  Unfortunately for Houston, he got hurt right as the gift exchange was happening but a special gift was sent out and imagine the gleam in my eyes as I got THIS from the Brown Santa aka UPS truck:


The TWH took NO time whatsover deciding that the Hanging Balls are much more important than hay and thus we have had a lot of this: 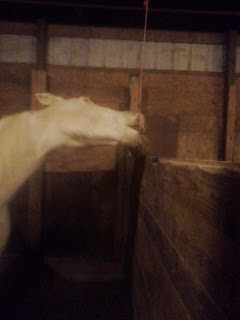 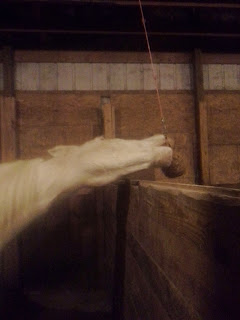 Thank you so much to Hillary and Houston for the yummy treat, I hope Houston heals up fast!
Posted by appydoesdressage at 5:43 PM 5 comments:

Email ThisBlogThis!Share to TwitterShare to FacebookShare to Pinterest
Labels: TWH

Mia introduces her sassy side

The horses are doing really well, the dental visit has done wonders for the TWH.  He went from wasting about half of the hay despite a slow feed hay bag back to being my Hoover.  From being able to feel ribs when you press through his fat to now solidly being unable to know he even has ribs.  Mia has become quieter in the bridle and she has continued to put weight on, I think I will have another easy keeper once she is where she needs to be.  The App is having his typical hard time acclimating to winter but after supplementing with some rice bran he is almost where I want him and he is really easy to keep once he "gets there".  Weird old horses and their weird quirks.  He can be/was super fat in the summer.  Fall came he was fine, cold hit and he just drops the weight despite the additional hay and doubling of grain.  Sept/Oct/Nov for the past 4 years are spent re-packing pounds on and then he is always fine all winter.  Go figure.  Speaking of winter, what happened to the slow winters like I have been having the past few years?  I've actually had time to ride several times in the past couple of weeks. With giving lessons and other things going on though, I just haven't been riding much as I wanted.   "Several times" does not equal 3-4 times a week which is what I need.

On Sunday, though, I finally found time to ride the horses! I rode Mia first, our goals have been pretty simple.  We've been working on trying on maintaining contact while balancing while steering and also playing with the canter.  She has been doing really well and now that we have steering most of the time, it is time to focus on the canter.  I should have taken things as an omen when I started tacking up, Mia was pawing in the cross ties.  Bad mare!  No pawing, not going to let you start that bad habit.  I hadn't ridden her since Wednesday and they hadn't ran much due to the really bad weather, good thing she is so chill right?  I got her ready and made the decision to ride the fence line to make sure nothing big was on it after the 5+ inches of snow.  I brought her into the main pasture and hopped on, it sure was windy but it wasn't a big deal.  We started walking and we hadn't even made it to the treeline when I felt a big hitch.  What was that, did she just kick?? I booted her around in a circle felt it again.  Yes, that was definitely a kick.  I put her nose to my knee and made her circle 5-6 times before letting her go, under no circumstances is that behavior allowed!

We walked on and while she was very up and alert, our ride was fairly uneventful.  We made it to the second corner and I had to correct her speed only once.  She had a pretty decent spook at a huge deer that leapt over the fence but thankfully it was a spook that was mostly in place.  I much prefer those kinds of spooks!  After that she was even more up and alert when we made it to the third corner and started to home.  About a third of the way there, I felt it again.  That was definitely either a kick or a buck.  Before I could do anything about it, she gave a couple crow hops just to make her point.  BAD MARE!  I yelled at her and put her nose to my knee again and kept kicking her until she had spun at least 10 circles, it was enough I was getting a little dizzy!  She was eager to go while we walked off but we were successful in walking back to the arena without incident.  Once there I put her on the lunge line and pushed her out, if she had steam to blow let her blow it without me on her in the middle of a field full of stumps and limbs!  She volunteered the trot very quickly and took very little encouragement to go into a canter.  I held her in the canter about 3x longer than normal, however and after she was starting to lose her breath, I switched direction and did it all over again.  All in all, I only lunged her for about 10 minutes and the look on her face when I hopped on instead of letting her be done was priceless.  She seemed genuinely surprised I wasn't giving her rest like I normally do when she works.  Haha, bad mares don't get rest!

The arena part of the ride went really well, Mia is steering very well now and is even keeping her shoulders up through corners 90% of the time.  If she does drop one, it is her right shoulder as she turns left.  We even got the canter and I have to say, if it was her being tired or her getting more balanced, that was the best canter she had ever given me.  It was fairly slow and fairly balanced instead of plowing along at mach 1 as she tries to keep me between her and the ground.  Quite impressive!  After a good 40 minute ride we called it quits and she got to walk under the cooler for a good 10 minutes or so.  Plenty of treats afterwards seemed to have fixed any bad feelings, however, as all seemed forgiven as I put her away.

The ride on the TWH was uneventful, I am working on getting him fit again and getting him to work in a shorter frame, especially in the trot and canter.  We are progressing but it will take a little time.  This week has been a complete failure for riding but I am really hopeful next week will have plenty of riding time as I have the week off.  Let's see what I can get done.
Posted by appydoesdressage at 9:54 AM No comments:

When I bought Mia, the people I bought her from had her skinny, in dire need of a farrier and just about nothing else.  I asked about her background and they couldn't give me anything, not who they got her from, the area she came from, nothing.  After I got her home I tried calling the phone number listed on her coggins and despite leaving 2 messages, no one ever called me back.  I tried finding her breeder and wasn't successful so I gave up.

For whatever reason, today I decided do start researching again.  I went into the ApHC site and pulled her Dam's production record and found she had only 2 foals, both from the same sire and a year apart.  I pulled the breeder info and got a new city so thanks to the wonderful, dangerous world of Google I was able to find her phone number.  It is scary how easily you can find info online nowadays!

I called expecting to leave more messages and to my surprise someone answered!  I talked to the guy and it turns out the breeder listed was the guy's daughter, all of the horses actually belonged to the guy and his wife.  Mia was registered to the daughter as the daughter is the one who showed the breed circuit so Mia was registered as such.  It turns out the dam came from South Dakota and showed with the daughter for many years and won several championships together.  She had a small injury so she was bred to a World Grand Champion while she recovered and had Missy.  At some point between the time she had Missy and the time Mia was born she got pretty sick and lost her vision.  Mia was worked with and imprinted from day one, they spent a lot of time with her as they did with all of the horses.  She was halter broke at a week old and was exposed to as much stuff as possible at a very young age.

About 5-6 years ago, when Mia was just turning one, the daughter became pregnant and couldn't ride due to a very complicated pregnancy.  After her child was born, she apparently gave up riding and as a result both Mia and Missy sat around for years.  They put about 30 days of training into them and sometime last year they sold both Missy and Mia to the same person for almost nothing with promises of a great home with huge pastures.  I don't think who I bought Mia from is the same person who bout Mia and Missy from the breeder but I still know the condition in which I bought Mia.  I told them about the condition I got her in and told him that they didn't have Missy when I went and saw Mia.

I gave them my info and we may connect to see new pictures of Mia, they had wondered how the horses were doing but hadn't gotten a hold of the buyers.  It makes me really happy to know that Mia was bred purposefully as a show horse and had a lot of ground work installed on her at a young age to prep her for it.  It makes me much happier knowing her history and knowing that the condition she lived in when I got her was only for a very short period in her life.  Hopefully at some point they will see her name on a showbill know she has a great home.
Posted by appydoesdressage at 1:11 PM 3 comments: