Moving.  Moving sucks.  Packing sucks.  Packing all the things sucks.  Trying to go through crap that you don't use because it is SO's and he isn't here to pack his crap sucks.  Most of my riding time has been eaten up with packing/sorting and it just isn't fun.  As a result, my mind has been revolting and has found every single damn opportunity to distract me from packing.  Watch the last season of LOST (the best TV show ever, thank you very much)?  Sure!  Go to the movies with a friend?  Sure! Go to the lake with in-laws?  Why not?  Take an impromptu trip to go XC schooling?  Hell yes!  Guess how much packing was done? :)

On Wednesday, a FB friend made a comment that they were going to the venue that Mia had the 3 stops at during our first Horse Trial in case anyone was interested in joining.  An opportunity to go back and make sure we don't have these issues again? Why not!  K and I loaded up Sunday morning and hauled the 1.5 hour trip, met the friend and hopped on.  Mia was pulling her OMG I can't even horse!  Shying at anything, inability to go straight, looking at everything.  It is better than it used to be, I think even more exposure will help.  Since we were in a great big field, I just pushed her forward into a gallop and let her burn off some nervous energy before popping over a set of barrels.  She eyeballed it but went over.  We then went around to the log of jump 4 of the first Horse Trial and sent over it to the barrels, she eyeballed the jump 4 pretty hard before going over it and didn't care about the barrels.  Really mare?  You are thinking of stopping over a log?  Ah baby horses.

We played with going up and down banks and even tried the Training bank, jumping up a 3 foot bank, going 2 strides and then hopping over a 12 inch log to a 3 foot drop.  Mia was pretty unsure about the drop and I almost came off by jumping ahead of her, for the second time ever, however, she saved my butt and went down the jump.  Good mare!  The second time we attempted it I had to really convince her to go down with some smacks so after she did it, I let it be.  No sense in making a big deal out of it at this point in the day, that is training level!  We put together a course and Mia was mostly great.  She jumped everything we went at (including the scary intimidating jump from last year's HT) until we made a 90 degree turn.  She was really fighting me on speed and didn't see the jump until the last moment.  We went over ugly, with her hanging her legs, and landed with me not having reins anymore but I stayed on.  Mia is not good with surprises lol!

From there we played in the water, to which Mia was amazing with.  Absolutely no hesitation to canter into the water that she hadn't seen since spring AND we jumped out of the water via the Novice level log.  Easy peasy.  We went over to ditches (I hate ditches, have I mentioned that?) and I schooled over the BN ditch before moving over to the Novice ditch.  Mia was having none of it and I pictured myself falling off.  Again.  However after watching the friend go over it, she decided it was no big deal.  No big deal enough that she didn't care about any of the other ditches we went over.  AND we went over the Novice ditch to a training level log 2 strides away and she went over it amazingly.  Love this horse sometimes!!

We finished up with another course which was uneventful.  She cantered up, she jumped, she rode away, sometimes trying to take off, other times not.  The friend noticed that Mia puts her head down after jumps, I am not sure if she believes me that Mia is GREAT compared to how she was at the beginning of the year.  Mia hasn't been putting her head to the ground at all and only tried to put her head down on landing once the entire day.  Training win!

Overall it was a good day with no real issues.  I need to be taller and not get ahead of myself when jumping Mia.  I need to wait more, especially over ditches and down banks.  Thankfully my two point was on par and while my legs are tight today, they are not sore.  And as a result of taking more fun time, I got exactly two boxes packed yesterday.  Oops.
Posted by appydoesdressage at 3:20 PM 3 comments:

What do I need?  Lessons.  I really need lessons with M but unfortunately they are not even close to cheap and I just can't swing it right now.  As a result, my dressage isn't where I had hoped it but we are getting there.  One thing that really spoke to me is a post I read about controlling haunches from bakersfielddressage.com/home.  She was having issues with cantering and found it was actually an issue with the haunches.  Hmmm....

We started at a walk and Mia didn't want to listen to the right leg.  I get it, it is my bad leg and it isn't as strong as my right but you can respect it Mareface.  I grabbed the dressage whip to help reinforce the leg and progress was made.  I was very firmly using my outside leg slightly behind the girth to make her do a haunches in and then had to work even harder to get it on a circle but we did get it.  After working on this at a walk for about 15 minutes we went into a trot and it was cool.  I started to have control of her haunches and could direct them to be in or let them drift out and I could actually tell the difference when she drifted.  Progress!   I think another ride or two and she will "get it" and stop drifting so much.  We made much better progress on this ride than we have in previous ones.

I also am working on having much shorter reins to try to combat this persistent inconsistency in the bridle.  Her constant grabbing, releasing, unsteady contact is also very annoying and I am trying really hard to make sure it isn't me.  I worked very hard to ensure my hands were not pulling backwards and micromanaging and unless my reins are really, super short, she won't keep contact.  So it is another thing we are working on. I am thinking I will have the equine dentist out to see if that turns up any issues, maybe she has tooth issues?  Just need a little more funds, you know, thanks to the big purchase in PA.

Last night was my last ride until probably Tuesday as I am now preparing to race the racecar again this weekend.  Not my thing but apparently since I drive fast, I was given no choice.  Damn obligations!  Then we will have 3 weeks until our next show, keeping fingers crossed we can get our dressage together and get great scores again!
Posted by appydoesdressage at 2:52 PM 2 comments:

Present and accounted for

Things are happening here in this little slice of heaven, I have finally started having showings on our farm (finally) and am just waiting for someone to come along and give us an offer.  We have had 4 showings in 2 weeks, hoping for even more!  The big piece of news, however, is that we now own a house in PA.  A really pretty one, I think, and it is in very good shape so there is virtually no "work" needed to it.  Win! 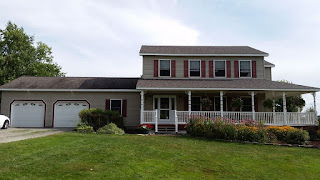 Over this past weekend I went to PA to sign my life away close on the PA house and moved some basic stuff in.  A bed, basic kitchen supplies, bath stuff, etc.  SO will be staying there on the weekends that he doesn't come back to MI and I will be going out there so time to start moving some stuff!  The biggest task *(so far) is now complete, now time to start packing up the MI house and slowly move it to PA.  So much packing to do!

The horse, surprisingly, is actually being ridden though!  We have done a few dressage rides which have been okay.  Nothing spectacular, certainly nothing to talk much about.  Now that we have closed in PA, maybe I can find some funds to take those much needed lessons again.  Ugh.  I did end up having a jump school last Sunday with K and TWH and it went really well.  Our gymnastic was a placement jump to 18' vertical to 20' oxer to 19' vertical in an effort to practice lengthing and shortening our stride within jumps.  Mia did SO well at it, K kept accusing me of having already done this before on Mia.  I hadn't, I promise!  Mia was just responding so damn well that it was pretty easy for her.  Ha!

We only went up to 2'6" which is the max that K is comfortable jumping and only a max oxer of about 3 foot due to very heavy rain that was coming in and we ran out of time.  We were literally running our last rounds with thunder and low light.  Yikes!  BUT look at my position, WIN!  Again my heels are down, I am looking UP and while very slightly ahead of Mia and while not as closed in the hip as I would prefer, it is still a good pic.  Yay for basics fixing stupid habits that had developed!

I will certainly be riding on Wednesday though I am not sure how much I will be riding over the next few weeks as I concentrate on some packing.  If someone would make an offer on my farm within the next 30 days, it would simultaneously make my life SO much easier and SO much harder and I would be very thankful for it.  Keeping fingers crossed!
Posted by appydoesdressage at 1:25 PM 4 comments: