Mia has now been on basically stall rest since Sept 13. I am not supposed to do much of anything with her until Dec 13th. I am constantly asked "How is Mia doing", to which I reply "I dunno. She's alive." I go out 4x a week and brush her, give her treats, clean her feet, and apply Keratex. Also make sure she has an Uncle Jimmy's Hanging Ball and hay. That's it. I try really, really hard not to even watch her walk because if even think I see lameness, I am going to fall into depression again. No one wants that.

That said, it has been 6 weeks of stall rest and with 2 weeks until the farrier is out again, I just couldn't help myself. Is Mia sound? Still lame? Ugh, how would I KNOW! So I threw her in the indoor for about 4 minutes to see how she moved.

By all things that are great, she looks SOUND. It was such a morale boost to see she was looking good after 6 weeks of standing around. I had lightly trotted her after her farrier appointment on the 27th and she was lame, so the fact she was sound made me feel SO much better. I gathered her back up and threw her back into her tiny paddock. Every time I get antsy about her not having room in that paddock, I remind myself she is supposed to be on stall rest. The fact she has a paddock is more than the vet wanted to begin with. 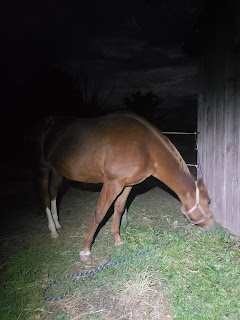 So what I am doing? Letting her hand graze a few times a week by headlamp because it is dark by 7p when I get to the barn. I am also riding a 20yr old OTTB who hasn't done a lot in recent years. It is a lot of walking and lateral work to get her loose again. It is also a lot of kicking and whip smacking because she will dead on stop and refuse to go like a 4H pony, but it is better than not riding at all. The owner says she does this when she is in heat, so fingers crossed it gets better through winter.

I am cautiously optimistic about Mia's recovery, here's to hoping that 6 more weeks of stall rest will take care of the rest of what is wrong and we can come out of the other side of this and get back to work. I know the rehab will be slow, a month of walking at least, but if this WAS a DDFT/SDFT injury I am not taking chances. Super slow and steady is how we are going to come back from this. We will compete again damn it!

Posted by appydoesdressage at 8:27 AM No comments:

Hopefully you enjoyed some media. I will try to find something more to talk about!
Posted by appydoesdressage at 8:27 AM 2 comments:

Then it all fell apart. Again. Pt 2

The vet visit was frustrating. My normal vet didn't come, the other vet in the practice did. He said Mia was def lame but while she has been lame on her left front since we came home, that day she was more lame on her right front when going to the right on a lunge. To the left, her right front was sound but her left was lame. We blocked her right front and here is the rub. His notes say she blocked to 75% better. That is not the number I swear he told me. He said she was 30% better if her other foot was blocked, it would likely also be 30% better. He was convinced it was a soft tissue in her hoof, likely a Deep Digital or Superficial Digital tendon injury, but the only way to confirm would be a MRI.

He did take a bunch of x-rays and we also found a small fracture to the inside of her left front coffin bone. He said she should be in shoes, on Equioxx, and stall rest for 3 to18 months and that was that. The surgeon he sent the x-rays to said they didn't think it was a fracture, but a calcification that just floated off and a MRI would be needed for further diagnostics.

I sent the x-rays to a podiatrist who said the fracture is actually fairly common in horses that have a clubby foot, the opposite foot loads harder and it happens. He would like to have further lameness evals before sending her for MRIs, but that would also be due to the percentage differences mentioned above. 75% better is different than 30% better after a block.

I had the new farrier out on Sept 27th and we talked about what happened, how she is doing, and what the different docs have said. The farrier did not want to put shoes on her without knowing what we are stabilizing, as supporting the different tendons would have different shoeing requirements. He studied her x-rays and gave her a very nice trim while also finding that she has very soft soles. It is super easy to depress her soles with a tool, and even a hard press via a finger. Her sole depth is good based on x-rays, but her soles are really soft.

The current plan is to stall rest her for 3 months and find a way to strengthen those soles. I am using Keratex 3 to 4 times a week for now, as I have a bottle and a half sitting around. If that doesn't do the trick, I will switch over to venice turpentine and then durasole. The thought is that perhaps she is sore because of her hooves and once we can fix that issue, I will have another lameness evaluation done. The poor mare is bored out of her mind and is not very happy that she was taken off of her 5 acres of grass, but is handling it all well. I still go out and brush her and feed her treats, so she isn't being totally ignored, but I am picking up some boredom treats this weekend too.

Fingers crossed something goes better soon. I did a very short lameness check on her last night and while she is still lame at the trot to the right, it was a very mild lameness. I didn't even try to the left. Back she goes to stall rest for a few more weeks and hopefully some rest will fix whatever she has going on. Until then, I am riding a 20yr old OTTB mare at the barn. She is quite out of shape, but is nice enough to ride and I am super thankful for the opportunity.

As one can imagine, it is hard to come up with things to say when there are no answers and nothing is happening. One day we will be ready to kick ass again, one day.

Then it all fell apart. Again. Pt 1

The good news? Mia finished her last dose of Doxy on Aug 26th! Her final Lyme results came back as 1165 which is enough to be considered negative. WIN! It was a happy day indeed. So what else has gone on? A recap...

I had the USEA Horse Trial entry I had paid for that I needed to use or lose for Sept 5th. I decided to enter the BN HT, because I had no concerns about Mia jumping 2'7". Heck she barely jumps until you hit 2'6"! Despite not really being prepared, I entered and then immediately traveled for basically 2 weeks straight, I left on August 12th and got back on the 17th. I went out to the barn and Mia was off on her left hind with an abscess that had just popped. She was given treats and I immediately left for another week, getting back on the 24th. The new farrier trimmed her on Aug 23rd (I wasn't there) and could see where the abscess started, but she was still ouchy. He gave her a "passive trim" and she was still lame on that foot until Aug 27. On Aug 28th she was sound!

We went on a trail/light fitness ride on the 28th and Mia was ready to GO. She was super excited to be out and moving, and while she was fairly tired fairly quickly, it was a good ride. We did a small XC schooling at the farm on Sunday. While we don't have a lot of jumps, we do have some and Mia ate them right up. I was getting optimistic about our chances at the show! On Monday and Tuesday we had dressage rides that went....okay at best, but at 930p on Tuesday night I got a call from the barn owner. There was a dressage clinic on Weds/Thurs and the first 3 riders of the first day had cancelled because of the hurricane coming through, would I be willing to ride? Uh, sure?

The clinic ride was excellent, much better than my ride with Becky in May on the borrowed mare. Becky helped us with a lot of basics, but also with some refinements to get Mia really engaged. With 4 days to a USEA HT, I was so PUMPED and 100% ready for the show. I was now quite confident in our ability to score really well, and was actually excited for the dressage phase! Possibly a first ever??

On Thursday we had a stadium jump session, and Friday/Sat we had more dressage which were both excellent rides. Sunday AM we loaded up the trailer and headed to the show, which had changed from a HT down to a CT due to the extreme water the hurricane had left. It was one of the few times I can say with 100% confidence that I was looking forward to the show, I wasn't anxious, and I was very comfortable with our chances. Things were looking GOOD, including Mia. I had bathed, clipped, and even braided her, she looked amazing!

We got down to the show and it was lightly raining. Mia was perfect at the trailer. I got on and walked from the trailer to the warm up ring. I walked the big warmup ring 2x before trotting. The ring was super wet and sloppy, though not slippery, but Mia was really not moving forward. I asked for some long trotting to get her forward, and she just didn't seem right. I trotted another lap before walking to the in-gate and asking the question I already knew the answer to. "Did my mare look lame? Because she feels lame". The answer was yes, she was lame and after riding another lap, she was not only not working out of it, she was actively getting worse.

We scratched before we even got to the dressage ring, packed up and went home. Based on the scores in our division? I am so confident we would have placed 1st or 2nd. It was disappointing, but I am 100% confident in making the right choice for my horse. Mia was fairly tender in her legs, I was afraid it was a suspensory issue. She got 7 days of bute and poultice before I finally called the vet out for a lameness eval on Sept 13. How did that go? Stay tuned to find out!

Posted by appydoesdressage at 2:45 PM No comments: