Last Friday was the day I had to say goodbye to App. I have been dreading the date, the lead up is NOT something I would recommend or would do again. Next time I will have a vague time frame and when it is time, I will do it then or with a week or so notice. The lead up of 2 months is horrible and 0/10 do not recommend. 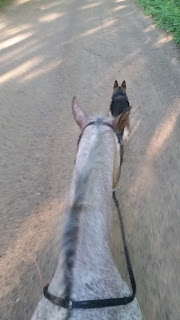 App has been dealing with severe shoulder arthritis since May 2016. There is virtually no joint space left and has significant bone remodeling in his left shoulder joint. It has been challenging to deal with that, as his comfort level goes way down in the winter and on wet days, but we have been managing. 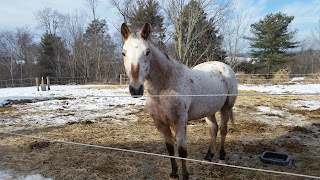 Then 2 months ago he started walking oddly. We had the vet out and he was diagnosed with a hairline pelvic fracture. On his good days, he just steps funny with his hind end. On his moderate days, his back feet step into an almost straight line with one another, like he is walking a tightrope. 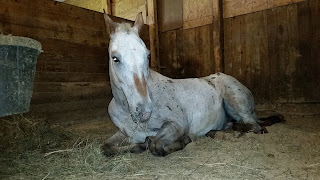 On his bad days? On his bad days, his back legs cross like a runway model, he doesn't have great balance, and will sway too and fro while walking. He was a weeble though, he hadn't fallen down, which was a risk he was labeled with, Though I was damn impressed that he didn't fall several times. 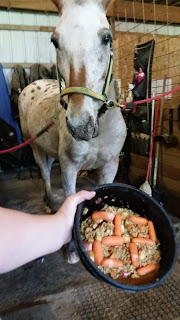 The barn manager has been going above and beyond to help make him comfortable. He started "free ranging" last year, she would regularly send me pics/video of his movement so I could help assess him since I wasn't there, and she would let me know if he was having a bad day and needed more drugs. She has never charged me more for the extra care, thought I have very regularly given her $$ directly. 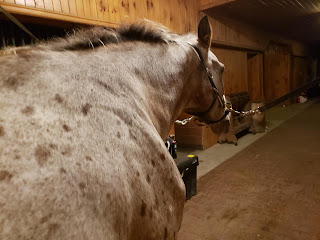 From cleaning up after him when he pooped/peed in the aisle/indoor/whomever's empty stall he walked into, to receiving death glares after dosing him with Tylenol, to putting boots/wraps on to try to prevent the pressure sores on his fetlocks from getting worse, she played a huge part in getting him to this September. I am forever grateful that she did this for him. 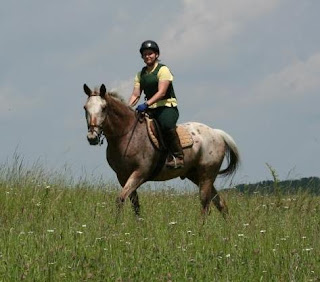 While Friday was hard for me, it was perfect for him. He got to free range with Mia in the morning (yes, Mia got to free range with him), he had plenty of hay when I got there at 2p, and it was a beautiful day. He got about 3lbs of apples and a pound of carrots. He was so full of treats, he didn't even care about grass. He begged for more treats even as we walked to the grave and he was happy and alert as the vet gave him the sedative. Joke was on the vet though, App is super hard to sedate LOL. When we let him go, he simply buckled his front legs and laid down. The vet said it was the best lay down she has ever had in her entire practice. I am glad for that, even in leaving us he was graceful and peaceful. 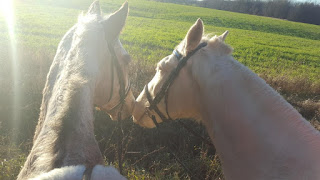 I know for a fact I made the right choice and would absolutely make it again, but I am still super sad. I wish I could have done this when he was 35 instead of 26. I wish I could have moved somewhere warm in 2016 so the winters wouldn't have escalated things. I wish he was still here. But he is at peace, is no longer in pain, and isn't going to to suffer when it gets colder. My biggest fear was him slipping and something worse happening with his pelvis fracture. 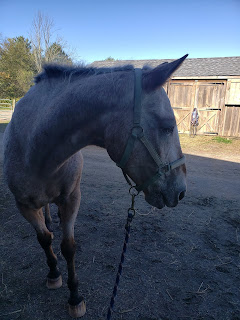 But I did everything right. The vet even commented that for as severe as his issues were, he was exceptionally managed. He even didn't look "old". That I was the only person they knew who managed a severe shoulder injury for as long as I did. That I was the only person who tried everything they suggested and there was literally no other options they could offer. That he was not in excessive pain, as he was in excellent weight and was super alert. I did everything I could and gave him a peaceful, happy passing. 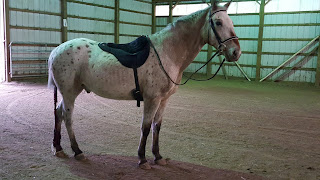 I would rather let him go a month too early than a day too late, so I did. So I shall hold him close to my heart forever, until we meet again for one more ride.

Posted by appydoesdressage at 7:19 AM

Email ThisBlogThis!Share to TwitterShare to FacebookShare to Pinterest
Labels: App