After getting up at the ungodly early time of 230a, I left the barn with MR at 445a. I had forgotten they made one of those, a 230a to wake up to. I mean, I've seen a 230a to go to sleep to, but to wake up to? Totally not appropriate.
The drive down was uneventful, which was nice. It was already 70 with high humidity, but at least the sun wasn't beating down! It got up to 90 degrees by the time BN was starting. 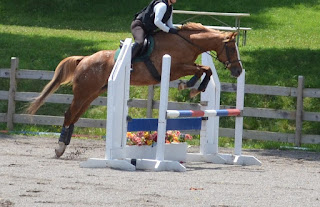 The dressage test was decent! There were comments like "tightness in the back" and "Needs rounder connection", but I expected them.
The pluses? Mia was pretty good! I am really happy with her work except the stretching trot and freewalk, in which she did not stretch down for either. Usually she drops down quickly bc it is her reward, weird that she didn't for either part.
The negatives? Uh....her rider was horrible. Again. I don't know what it is about her rider, but she really needs to step it up or give it up. I went off course in the dressage course. *sigh* Yes, again. At least in dressage this time so it was only 2 points and not 4. #progress
I didn't ask for much in the canter lengthenings. The trot lengthening was nailed for going faster more than lengthened. I could have pushed for more points, but the actual forgetting of my course apparently threw me enough that I didn't push.
I really need to get over this "forgetting my course" phase. This is not cool.
The stadium was the 2nd ride and it went double clear. She was sticky to the first couple of fences, which as weird. I thought I had her set up properly, but she wasn't crisp and actually hit a pole on the first jump.
We were super lucky in that the pole stayed up, and she made sure to not touch any poles after that. The rest of the course rode so cleanly and fast, I looked and counted when I passed the start/finish because I wondered if I missed a jump.
I was even tempted to ask the judge if I was clean, but figured they would have blown their whistle if there was a problem. Much better than the show for the Combined Test a few months ago!
Last was cross country. I was beyond happy that we had been schooling the weekend prior, the first 12 jumps on course were ones we had practiced over! We walked straight from stadium to the other side of the property for cross country. I was disappointed that there were no warmup fences for XC. Not a single XC fence to get the juices flowing, nor a stadium fence.
Next time I will def ask if I could school jump 1 of the BN fence. We jumped stadium, gave them a 15-20 min hack and immediately go jump T fences? Give me something to get things going again people!
Mia was actually sticky to the fences again?! Normally she locks onto XC fences and drags me to them, and while she wasn't really TRYING to run out, she was adding strides or drifting for about half of the fences. Fences 1/2 she was sticky at. Fence 4 she couldn't figure out how to canter in a straight line, but locked on about 4 strides away. Fence 5 she drifted enough I was actually afraid we would have a run out, but she jumped the bench very honestly, as well as the 2 stride bench of 6 after it.
We trotted down a very rocky path, since she didn't have shoes, before going over 7 and up the bank of 8 and the table of 9. Looking back, we should have galloped to 10, but I thought we had plenty of time. 10 was great, as was 11 into the water.
A sharp 180 degree turn and we went down the steps of 12 and over the trakehner of 13. 14 was a rolltop at the bottom of a hill and Mia dropped to a trot, she wasn't super happy to go down the hill but jumped beautifully once we she got to the rolltop. We galloped back up the hill before coming back to a canter and over the Training level half coffin. Which Mia did BEAUTIFULLY!!!! 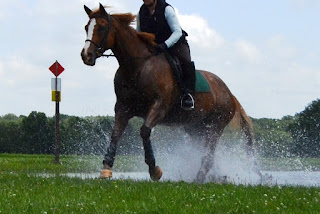 I will forever be grateful that my barn has this unfinished ditch that we practiced over for every ride until she stopped caring about ditches. #Win At this point, I realized we were going to have time faults and let her fly. Mia flat out galloped that last 2 fences and took them beautifully. We still ended up with 5 points of time faults. Womp womp.
I bet myself up pretty good on the walk back, but got Mia iced and cooled down in no time. If I could figure out how to properly keep my head in the game at a show, I knew we could do better. And time faults? Since when do we have time faults!? 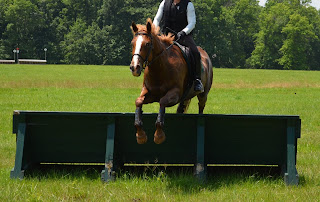 When they posted the preliminary results, my jaw dropped. We went from last place of 5th to 2nd place. OMG. We made up HUGE points during the jumping and XC phase, and not a single horse had gone double clear in XC! Someone did challenge their XC score so I ended up 3rd of 5, but still. OMG! We did it. We actually did it. We successfully finished our debut in Training Level, and did so in a manner I was proud of. 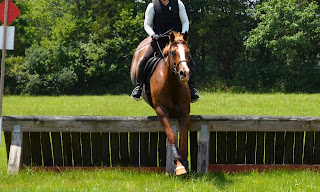 Could things be better? Sure. I don't know why Mia wasn't locking onto all of the jumps, but she sure did at the end of XC. She literally drug me to the last 3 fences and I was just a passenger. 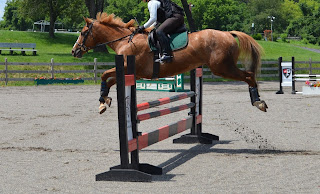 She got a good solid 3 days off to relax and hang out before having a quick hack. We were then part of the "OMG We are dying" heat and humidity over the weekend, so she got 2 more days off. And then last night was the farrier. The farrier was there late enough that I didn't ride, but let Mia run around and she looked fabulous. I won't be able to go out tonight #lifeproblems but I will be riding tomorrow.
Time to get going again. I am toying with the idea of another HT next month, and if not in Sept. I want to get this figured out so we can stop having these stupid mistakes!
And stay tuned, I have even more goodies for you.
Posted by appydoesdressage at 9:51 AM