Going out with a bang Pt 2

We went back to the trailer to prep for cross country, since it is a derby it has stadium and xc jumps.  Ick, stadium.  Mia loves to knock poles down in stadium.  We warmed up and Mia was very....surprising.  At one point I went to K and asked if she had painted a horse to look like Mia, this horse was taking every button I had installed over the past 2 years and was responding to them.  The horse I know as Mia doesn't do that!  Closing my hips and half halting with my seat = collect and balance?  Check!  Obtaining a trot transition with my seat?  Check!  Adjusting a canter stride to meet a fence?  Check!  Jumping when I ask when the distance is off?  Check!
Who is this horse I am riding?  I think I will keep her!  Warm up went really well and Mia only hit a pole once, she hit it really hard with her front legs and when she went over again, she jumped REALLY high to avoid hitting it again.  It was really funny and seemed to help as the rest of warm up was great.  My position was good (see pics, proof!), Mia was very in front of my leg and easy to control so we just hung out until it was time to go.

I wasn't 100% sure of the optimum time, I was pretty sure it was 6:28 or so, despite being almost a 2200 meter course I knew we would need to take the "scenic route" and trot a good bit.  We started off over the 4 stadium jumps and Mia was awesome.  She packaged herself up like I asked and didn't hit anything.  We took the "scenic route" to jump 5 which was a log and then drunk mare made an appearance as we struggled to get to fence 6.  Straight is not a direction she can do.  6 was a simple coop which she didn't blink an eye at but then we had to make it through some mandatory flags and through a path through weeds to get to 7.  Mia was quite sure she was not supposed to go there and we can to almost a walk before I could get her to go straight and listen to my aids.  Oh yeah, here is the mare I expect lol

As we went through the path, I came *this* close to dropping my crop and I panicked, at this point I NEED my crop!  I can't lose it!  I grabbed my crop, just barely, and had to then arrange reins, barely in time to make a 90 degree turn to get to fence 7.  I gave Mia a swat with the crop just in case she was hesitant after my scramble and we took a leisurely stroll to the water.  Which she didn't care about.  We then had a fairly significant downhill slope to the next 3 stadium fences so I sat up, sat back and asked for her to slow down AND SHE DID.  We went over fence 9 at almost a trot and 10 was clear.  I dropped her back down to a trot for a very tight 90 degree turn to fence 11 and I wasn't sure, she couldn't possibly have gone clear over everything so far?  I made a mental note to ask K and galloped through the field to fence 12.

12 was an uneventful log, 13/14 was an uneventful 3 stride but I noticed I was coming in right ON time.  Hmm, I should pick up the pace.  We went to 15 and I gave her a swat as she was playing drunk mare and I didn't want her to run out, 16 was an easy baby corner.  17 was a baby ditch and I wasn't super excited about it but Mia could have cared less.  Maybe one day I will forgive her for my falling off lol.  In my coursewalk, I planned to make a huge, long scenic route however I wanted to save some time now that I was riding it so I cut the corner and went to 18, 19 and 20.  We went to 20 when I looked and saw we were at 6:15.  Crap!!  I still had 4 stadium jumps left!  Apparently I was taking the scenic route TOO much or we were doing too well at rating our speed.  My two options were to gun it to make time or be cautious and go clear and take time faults.  I knew I had to have 10 time faults before I would equal one stadium fault so I took the latter option.  I sat up, sat back and got Mia over each stadium fence in a dressage canter without knocking any down AND came in at 6:36.
Despite our time, I was actually really happy with our ride.  Not only did Mia go clear, it was the first time that I felt like we were a team instead of two individuals that had the same task.  I felt like she listened to my input and actually agreed to some of it, that is a first!  We had a pretty long wait for our scores and when they finally posted them, I was in shock.  I was actually speechless.  Not only did we get a personal high score of 32.1 in dressage, which had us in second place after dressage, we did NOT have time faults because optimum time was actually 6:39 AND we were in first place after a refusal from the first place competitor.  AND we actually won prize money!!!  I am so, so, so happy with my mare!  The fact that she listened and responded to me is huge!  The fact that she did so well in dressage is awesome.  I am also very, very happy with our prize money because now we can afford to go to the last horse trial of the season which is in 3 weeks.  Time to keep on practicing! 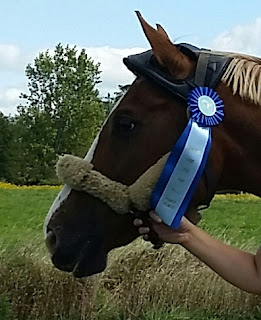 Posted by appydoesdressage at 7:55 AM