Coming back, one scoop at a time

Mia is finally finishing up her 30 days of Doxy and the turn around has been nothing short of miraculous. Do we have our ups and downs? Yes. Is she a fire dragon one day and totally body sore and lame the next? Also yes. But her demeanor has made a complete turnaround and I can't be happier with the results. Hyper-reactivity around the neck/poll/face? Gone. Often explosive reaction to simple requests? Gone. The overall sense of "something is wrong"? Mostly gone.
Looking back, I can see now that when things really started to come apart coincided with the time that I got my 18" saddle. I was telling my trainer that something was wrong, but we thought it was my saddle fit. Which, I mean, the saddle DID need adjustment but that wasn't all of it. Right after that, Mia started having weird reactivity including breaking out of cross ties twice. And having weird soreness/lameness. Even the second ever chiro eval was wonky, and the vet said she could tell Mia was amiss and very uncomfortable. Stupid Lyme being so hard to diagnose, why can't it present the same way in each horse for simplicity? 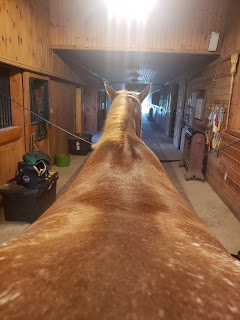 The weight loss she had is gone, she is BEEFY again!
This week will mark a full 2 months since Mia has been out of training. I have been walking her both in hand and under saddle constantly during this, as she always moves better at the end than at the start of a walk. I did try trotting her a few times over the past 2 weeks as she is totally over walking around. The first couple of times went very well, but then I let her actually do some fitness/work trotting last week and boom, completely uncomfortable again. I am going to wait until she is off of Doxy before I try again, many people are telling me their horses felt badly on Doxy. While Mia has felt great most of the time, sometimes she doesn't. No sense in trying to hurry the process, every time I have tried to get "back to normal", the wheels have fallen off of the bus. We are getting blood drawn this week to retest for Lyme, fingers crossed the numbers are good!
IF Mia is comfortable and sound, we are going to aim to start working this week and maybe go to a schooling horse trial on the 26th. We would be doing Beginner Novice or Novice, depending on her fitness level. I had already paid for a USEA entry in either June or Sept, so fingers crossed we can get our fitness back by Sept. I would love to go Training for my USEA debut, however with the timing, going Novice may be much more reasonable of a request. I am also aiming to go to Loch Moy in October (Hey Emma!) with someone else if she stays sound. #Goals

It has been a really defeating spring, we had worked so damn hard to fall short at the start line. I am really optimistic that things will get better. Mia is already so much better, it can only go up from here right?  Here's to hoping she gets back to feeling great all of the time and we can start doing the fun stuff again!
Posted by appydoesdressage at 7:19 AM