(The pictures are from our schooling session and not our show) 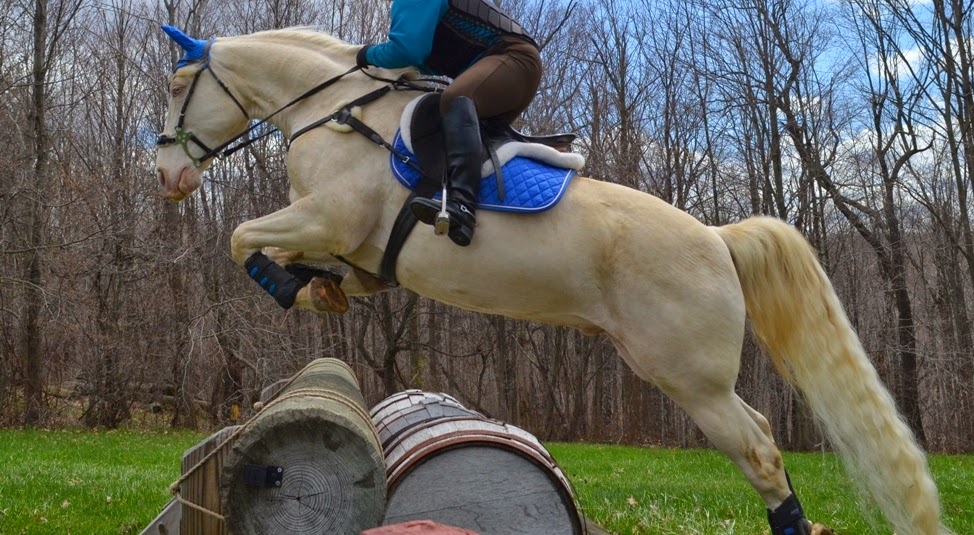 RB4 and I quickly untacked TWH and started walking the cross country course so I knew where to go.  The course looked like it may be rather small according the map, most jumps were pretty close to each other except for 5 and 6 which looked really out of place wayyyy off by themselves.  After some wandering to find the start box, we headed out.  Fence one was an easy coop and two was a stone wall.  Three was a log, 4 was a roll top and then there was a long canter to 5 and 6.  Like over 500 feet, it was a LONG haul back!  5 was a bench with a 4 stride to a ditch.  Great, a ditch.  TWH's favorite jump, not! 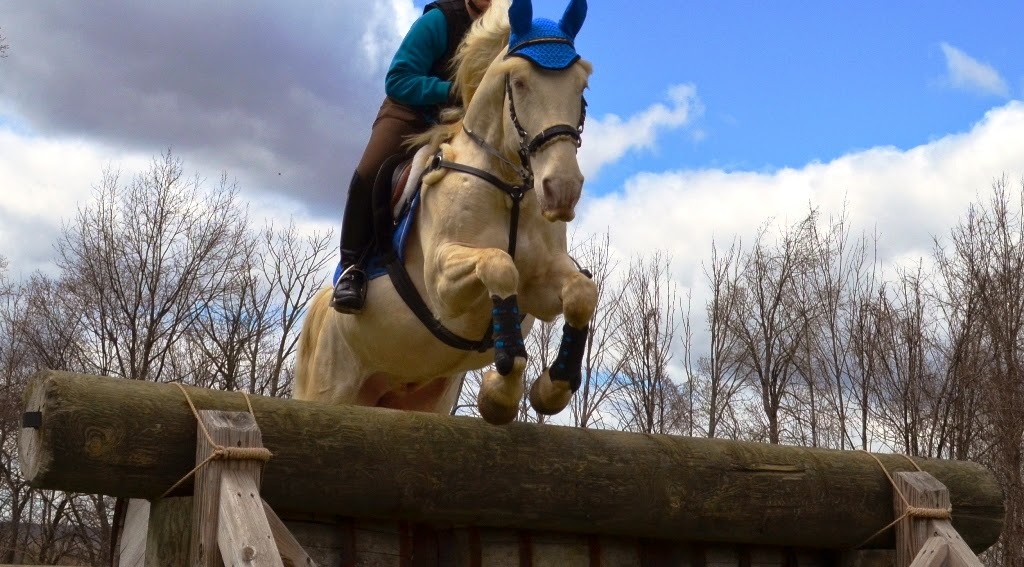 7 was a coop and 8 was a roll top, up a hill to 9 as a log.  10 was go into water and jump up a small bank (yay for practicing during our schooling sessions!) to a corner for 11 and a big ass castle jump for 12.  It was on a slight incline and was very solid making it look huge.  Surprisingly, on the other side it looked like a small, nothing of a jump but from the approaching side, damn it made me nervous!  13 was another corner, 14 was a veggie stand, 15 a log and 16 a wall with a 90 degree turn to the finish and we had 5:15 to get it done.  Oh boy! 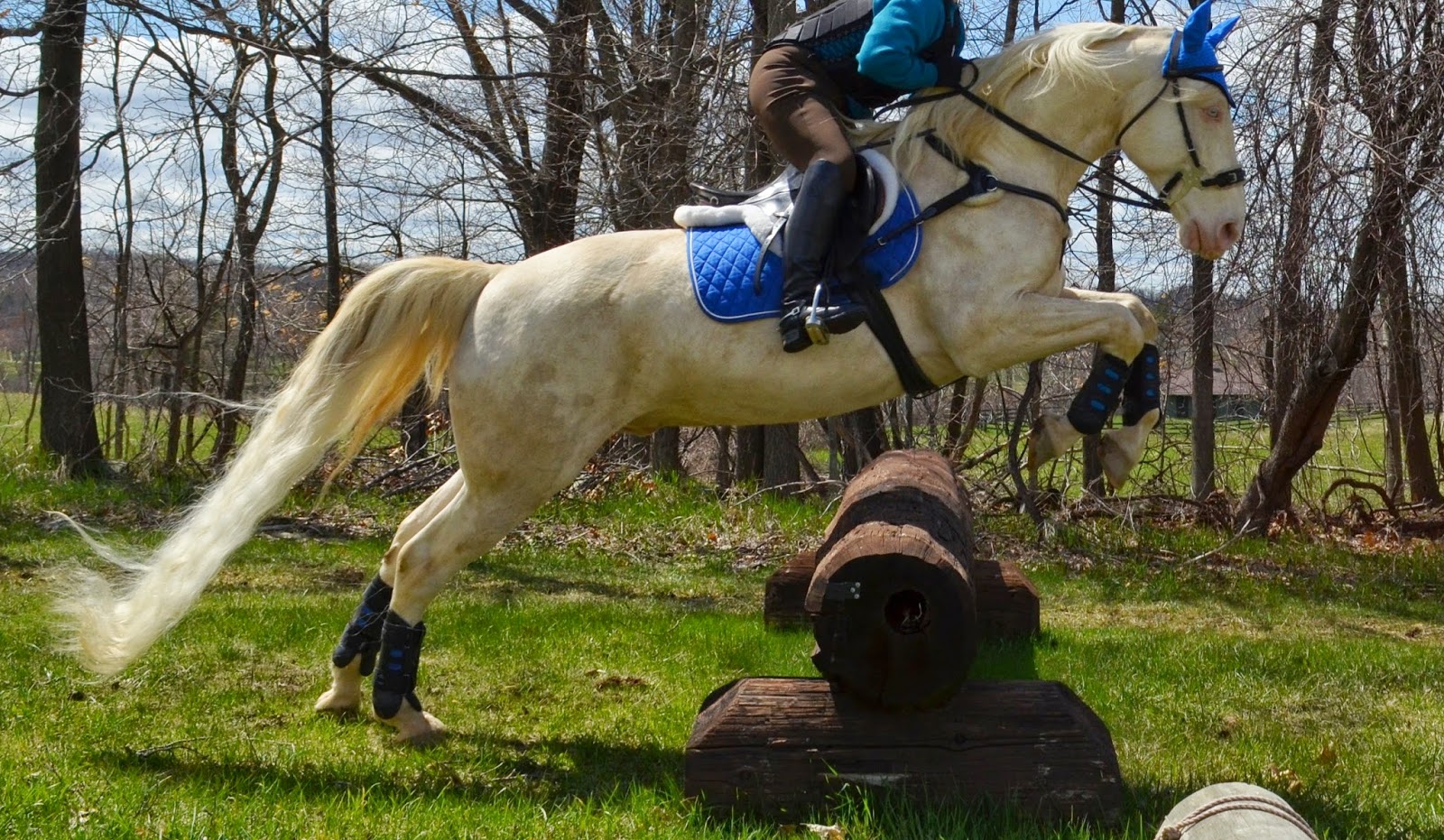 We got done with the course walk in time to eat a quick lunch and then get TWH tacked up.  They announced the placings were up so RB4 and I went over to see how dressage went.  My heart sank as I saw we had gotten a 40%, we were in 9th place.  I was disappointed because while I didn't think his dressage was spectacular, I didn't think it was THAT bad.  I kept my fingers crossed as we finished tacking up and made the fairly long trek down to the warmup only to find they weren't ready, warmup jumps hadn't even been put up yet.  After a lot of standing around and chatting with others, warmup jumps were finished and the first horse went out.  I took the opportunity to put TWH over the crossrail with the intention of going over the crossrail most of the time for confidence building, the vertical a couple of times and then the oxer right before we went out.  The issue was that the footing was horrible.  The warm up area had actual standing water on 75% of the grass footing.  As a result the footing in front of the jumps was horrible soft, deep and slippery.  Ugh! 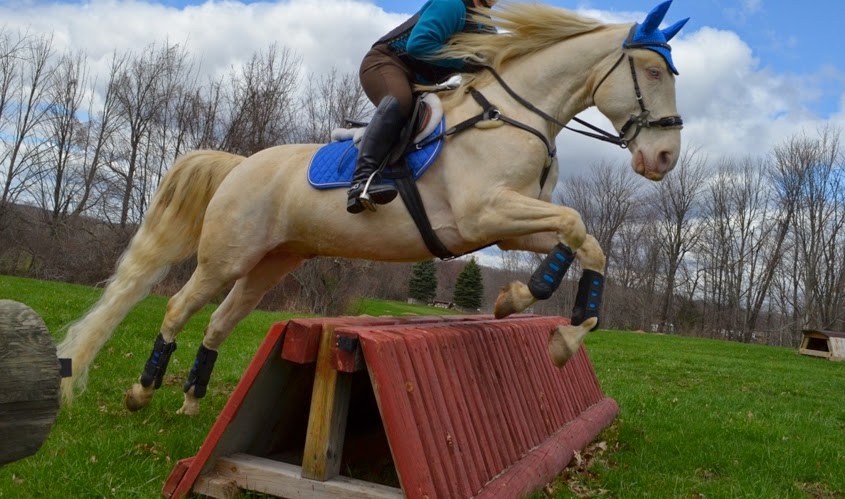 We went over the crossrail a couple of times before trying the vertical as the vertical was very slightly higher and drier than the crossrail.  He took it okay so I put him over the oxer with the intention of calling the warmup done until the ride before us left.  As TWH came up to the jump, his hind end slipped and he twisted in the air over the oxer.  Thankfully he stayed upright and I stayed on, he gave a great effort to help us both stay that way too, but damn, not how I wanted to warm up. 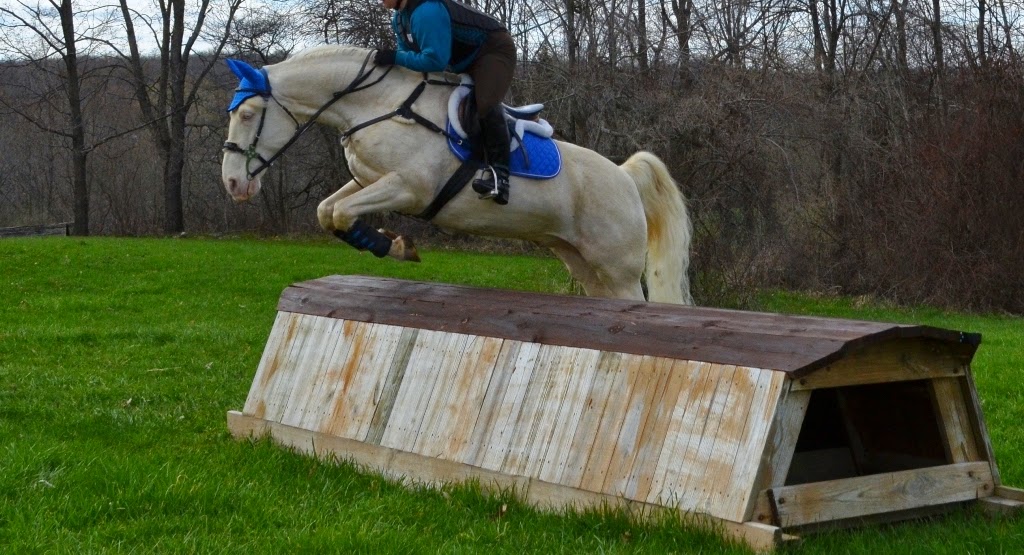 When the rider before us left, I made him go over the 3 jumps again and while they were okay, they weren't great.  No time to fix it and no place to jump anything better, might as well go on course.  Jump one was okay, he took it a little funny as he was unsure of the footing but we went over it and went to the stone wall of fence 2. 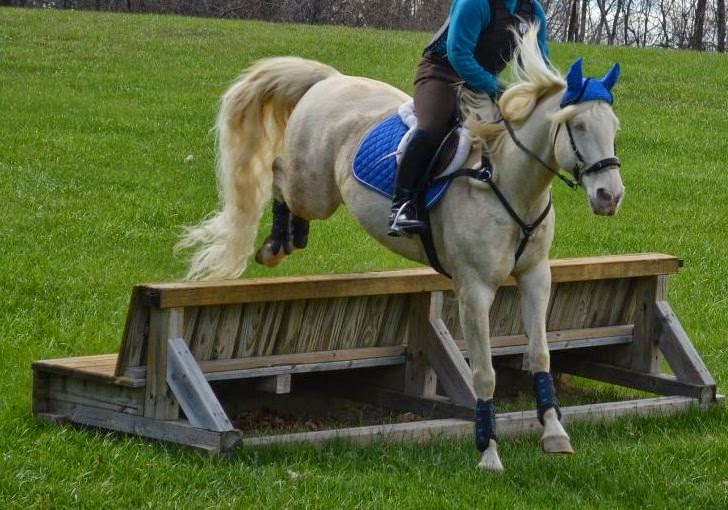 Fence 2 he slid to an almost stop as he seriously considered refusing.  I had kicked as we approached and I jabbed him HARD with the spur, we were NOT going to let this be how our cross country run was starting.  He jumped fence 2 from almost a standstill and climbed over the fence.  Oh TWH, way to make us look good. 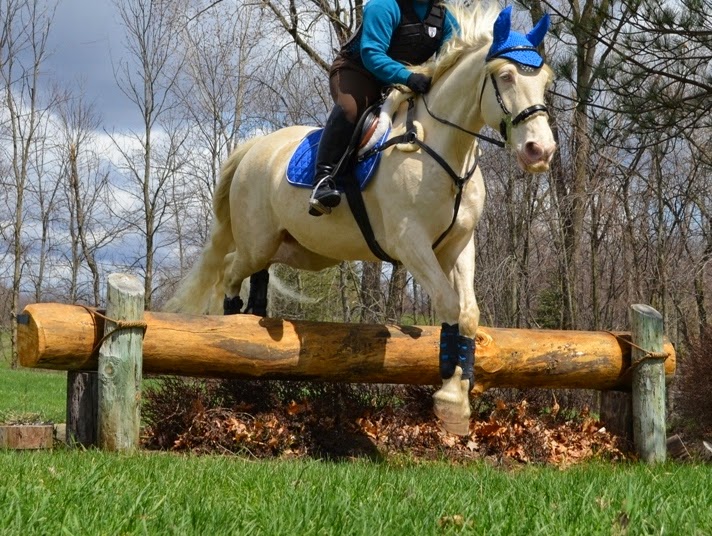 He got a seriously swift kick over fence 3 but he seemed much more in tune now and I didn't even add leg over fence 4 as we kept cantering along to find fence 5.  He took 5 without a problem but I knew the ditch was afterwards.  I was kicking in the air over fence 5 and he put on the afterburners in shock.  As a result, at the ditch of fence 6 he had way too much momentum to stop and we soared over it without even a blink.  Go US!

I let him cruise along for fences 7 and 8 and while I was getting tired, I wasn't having to apply much leg and he was jumping well.  The water was a little nerve wracking as I wasn't sure if he would go in but he did and jumped out perfectly.  So glad we practice every time we go schooling! 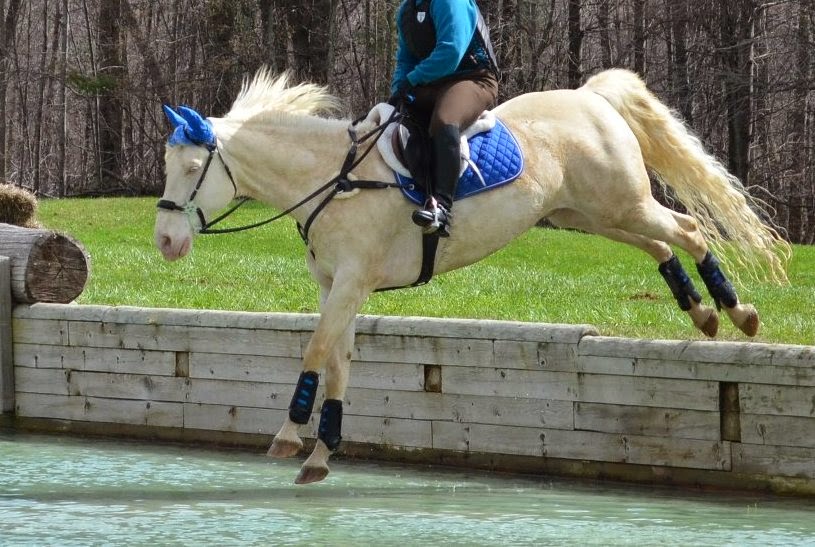 Fence 11 was easy though he jumped more towards the middle of the corner vs the edge, oh well.  Fence 12 was the intimidating one for me so I sat up and started kicking 4 strides out.  No surprise, TWH jumped it without even looking at it as all of the issues are in my head, not his.  At this point we were both getting really tired and I told him we only had 4 more to go.  13 was easy enough and 14 looked like a starter jump compared to some of the stuff we had been doing lol. 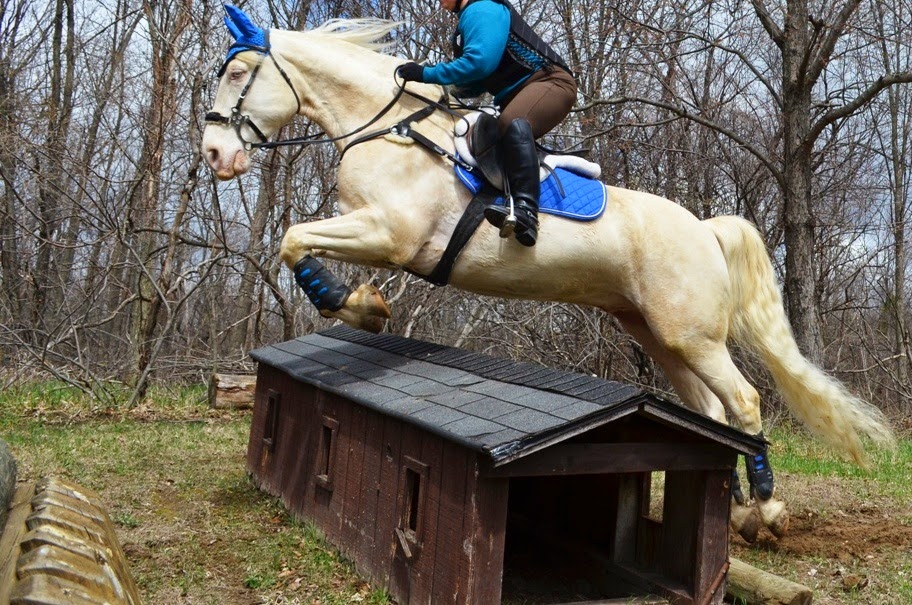 Fence 15 was a big hanging log and I told TWH we only had 2 left, we could do it!  I kicked him more than I probably needed to to make sure we made it over and we headed to fence 16.  I was exhausted, I had been conditioning TWH but I hadn't been conditioning myself in 2 point.  I had made it up to 4 minutes of 2 point and here we were pushing 5 and still weren't done.  I helped him over fence 15 by sheer will (who am I kidding, I was a passenger at that point) and trotted over the finish line at 5:10, just 5 seconds slower than optimum time.  It was the very first time I have come so close to optimum, nothing like not being adequately prepared! 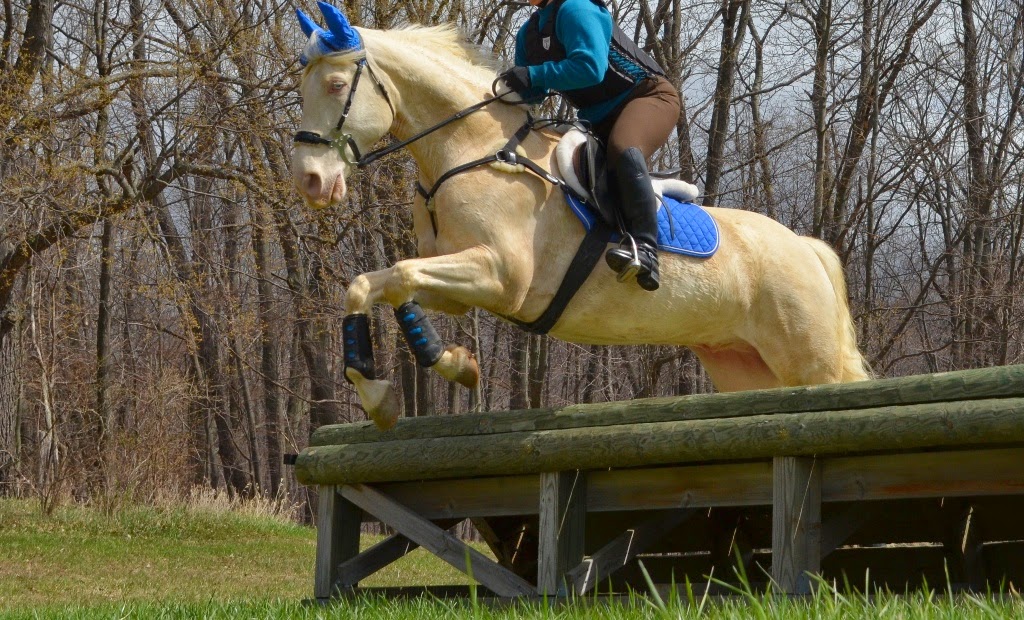 TWH got a nice rubdown, cookies and some liniment as we hung out for a couple of hours waiting for stadium.  I did a good bit of stretching as the xc ride had really put my lower back in knots, I knew I was going to be sore the next day.  I scolded myself for not being prepared in my 2 point, it was an unacceptable oversight that was unfair to TWH.  There is no reason I should be flopping around and still expect him to perform at 100% so I guess now I have homework. Bad rider. 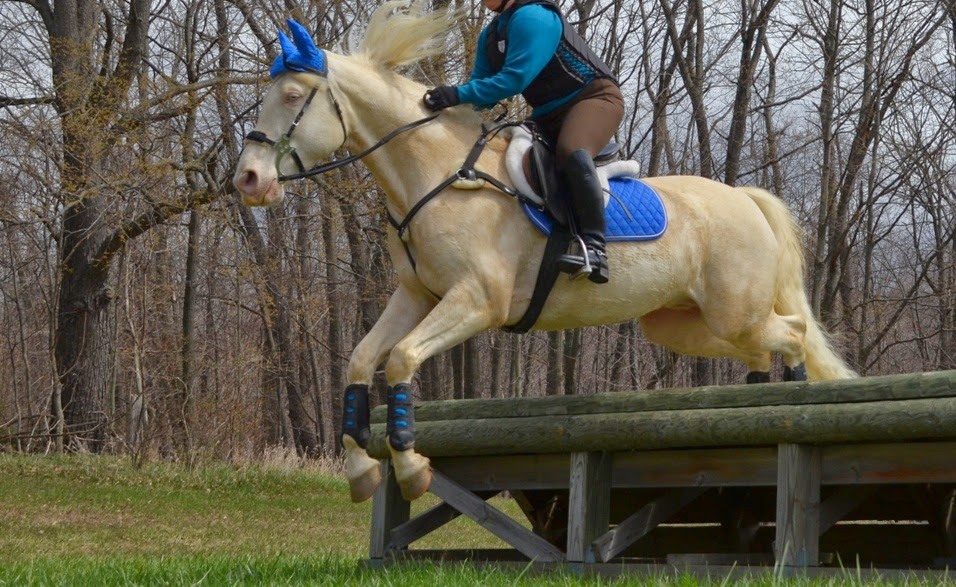 We started to tack up as the Training level riders made their way over to the stadium course when I heard the scores had been posted for cross country.  I knew at least 2 people had been eliminated during cross country, I wondered where that put us?  I eagerly walked over to see where we were score wise, will stadium make any more of a difference?
Posted by appydoesdressage at 5:30 AM