What did I do, must have head examined asap

One of the bigger philosophies I have followed in life is Everything Happens For A Reason.  While things tend to suck and something good doesn't always result from a sucky situation, the majority of times it turns out that things happened for a reason.  Something bad happens because I am being set up for something good that wouldn't have happened if option 1 had stuck around.  Buying our house in MI was a great example, we went through 7 months of hell, offers falling through after months of waiting on different 2 houses, SO living in a hotel for 6 months, unbelievable stress and then suddenly our dream home with a barn, arena and workshop popped up in our search quite suddenly due to a price decrease and 30 days later we closed on it with no drama.

TWH came up lame after our show in September and I brought him to the equine hospital on the 20th.  2 days later I got a phone call from my instructor, H.  She had looked at a horse as a potential prospect for herself and was passing because the horse is smaller than advertised but thought it would be a good fit with me.  Wait, what?  She said it was a young mare that was just broke out this past spring, 16 hands, has good conformation and for some reason had caught H's eye for potential, that I should go look at it.  Everything happens for a reason, right?  If TWH hadn't gotten hurt and had felt as great in the last show as he did in the August show, I wouldn't have even considered it.

I talked to SO and he said he has been expecting the 3rd horse for a year now so I might as well go look at her.  She was being advertised about 1500 out of my price range but H said the people were desperate to get rid of the horse due to a boarding situation gone bad.  I was sent several really bad pictures of the mare because, obviously, why would you take GOOD pictures of an animal you want to sell?!?!  (Sorry, major pet peeve of mine).  I finally requested very specific photos that would show her squared up, in frame and clear so I could evaluate her conformation.  I got them and they were actually not bad at all so I made an appointment to look at her on Saturday.

Saturday I drove a little over an hour to see this horse.  Upon arrival, we discovered we couldn't bring her into the arena to ride because the gates to her turnout were padlocked.  Apparently these people owe board and the barn owner said they owe 2k and they say they owe 200 and the barn owner wanted this mare and another one of their horses in trade and they were refusing.  Oy, what was I getting into?  I climbed over the gate to see her and though she is underweight and her feet are horrible as they haven't seen a file in a good while, she moves quite nicely and was very soft in the halter. Apparently the owners also didn't have any tack at the barn anymore other than a bridle for one of their other horses.  Luckily I had brought my own saddle to see if it would fit (it DID!) and they found a girth that should have been thrown out 5 years ago.  The owners weren't to keen on getting on and I hopped on to see what she would do.  She knows how to move forward into a walk, she knows how to turn when I pull her head and she knows how to stop when I pull back.  Nothing else.  Well, that isn't all bad I suppose.

There was some discussion with them that yes, I liked her but she isn't worth anywhere NEAR what they were asking for her.  She is very green, underweight, in need of a farrier, not UTD on shots or coggins and are coming into winter when horses don't sell.  They asked what I valued her at and to not worry about insulting them and I told them what I thought she was actually worth which was well less than half of their asking price.  There was actually very little negotiation and I bought her for $200 more than what I told them.  I went home, got the trailer, made the trip back down and picked up my first ever 3rd horse.  OMG.  Introducing Mia, a 6yr old greener than grass Appy.  She is chestnut with some frosting on her hip and some slight roaning through her body.  She is hopefully my diamond in the rough.  Once I got home and could look up her papers, I saw her sire is a national ApHC champion in hunter in hand, hunter hack and hunter under saddle.  He is also has multiple world grand championships including suitability for dressage.  COOL!!  We have lots of work to do, she is content to bump into you when excited, head in the air and has no manners.  The next week or two will be mostly ground work, I am so excited! 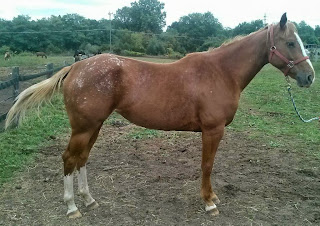 No worries though, our beloved TWH still has plans.  If he passes his checkup this week he will be going Novice level next year while I have fun with him and work on training Mia.  If he doesn't pass his checkup, he will get some months off and be relegated to a judged trail ride horse and maybe even a mounted patrol volunteer!
Posted by appydoesdressage at 8:33 AM