What does the dentist of the year get? A little plaque

Yesterday was a busy day here at LogDog Acres, after some cancelling, rearranging and last minute finagling, the dentist was out!  His original appointment was last Tuesday so last Tuesday I got everything ready, drugged up the donkey with some Ace and waited.  Unfortunately the dentist called right before his appointment time and said a deer hit him and he had to reschedule so we made the appointment for last night.  When he came, he showed me pictures of the deer accident.  The deer didn't just hit him, it went completely through his car, all the way through.  The car in front of him clipped the deer, it went airborne and came into the car's passenger side windshield, through the car and out the passenger side rear glass.  OMG the pictures were scarily amazing.  The dentist said he was so glad he didn't have a passenger, they likely wouldn't have made it through the accident with as much damage as the deer did to the passenger side of the car.  The pictures were jaw dropping.  Glad everyone but the deer made it okay, and at least the deer didn't survive and suffer.  Yowsers!
That night the dentist cancelled, I had a drugged donkey.  Since donkeys tolerances for drugs is a good bit different from horses, I decided I might as well see how she reacted, was 2cc's of Ace going to be enough?  I brought her out and tried clipping her bridle path, a task which I have tried only once before.  Without drugs I would say her reaction had been about a 9 on a scale of 1-10 with lots of leaping, jumping and body bumping.  With the drugs it was about an 8.  Ugh.  I called the vet and asked for an opinion.  He had me try again with a different dosage but the second test failed too.  We had a talk and he sent over some xylazine to mix with the Ace..
Unfortunately the xylazine has to be given IV and not IM and only lasts about 30 minutes.  I had heard donkeys are really hard to stick and they weren't kidding.  It was HARD!!  I finally got her vein after tying a tourniquet around her neck and sticking her, getting plenty of blood everywhere else in the process while fumbling for the syringe. *sigh*  Nothing is easy with her is it.  After letting her hang out for about 10 minutes we went to work.  The dentist was very nice and calm and handled the donkey with skill.  And she handled her treatment very well!  I am very glad I decided to go with the drug route though, she may have been obviously drugged but she still gave him a hard time at a few spots.
He said her mouth was in very good condition.  She had some pretty sharp edges but that was her only issue and her tooth health was very good.  Yay Donkey!  He did a lot of rasping and rinsing and let her take quite a few breaks, 20 minutes and she was done.  He finished by saying that she isn't as old as I was told, she was supposed to be 8 or 9 when we got her back in 2010 so she should be 10-11 now.  The dentist said she is just now about 7-8, guess now we know!

Up next was the App, I told him the App's short history and the dentist was impressed with his teeth.  He said the App has some sharp edges but for being almost 20, he has really really good teeth.  He still has plenty of tooth left so he isn't even close to having mush yet and had no breaks, cracks or other tooth issues and still has all of his teeth.  Yay App!

The App is an old pro at this stuff and has never needed sedated to have his teeth done, he just stands there and takes the abuse.
Finally we had the TWH and I figured he had something going on since he can be so inconsistent with bridle contact.  I expected there to be some issue we would need to address or something, turns out he only had sharp edges as well.  His back molars were really sharp but his teeth are also in really good condition and a quick rasping session got him back in line and to his hay bag.

The best part of the App's and TWH's dental visit were their expressions.  The App would go from a relaxed look to a WTH look and all looks in between.  The TWH, however, had one look and it was a look of horror. 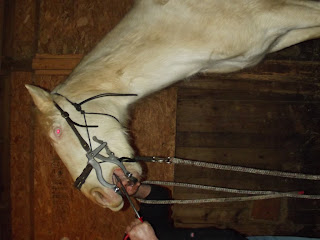 No matter how many pictures I took of him, this is the expression he had so it looks like I have simply have the same picture zoomed in or out in almost every single frame.

When I fed everyone this morning I was very happy to see the App didn't drop any grain while eating and he had finished his night hay, something he has been leaving a little bit of every night.  The TWH and donkey ate like normal, big vacuums, so I am exited to work each of them in the bridle to see if there is any behavior changes.  I expect there to be a change in the TWH, for him to be more consistent in contact.  I am not sure if I will see a change in the donkey but it will be fun to try her out.  It is supposed to be be bitterly cold this upcoming week, highs in the low 20's, so we will see how much I end up riding.
Posted by appydoesdressage at 7:06 AM