The App has a good day

Alas I am still laid up with my pulled calf muscle, my lower leg is now showing heavy bruising clear from the middle of my calf all the way down to the arch of my foot.  On the flip side the bruising doesn't hurt nearly as much as the back of my knee.  Right below the back of my knee is killing me and when I sit for a while or go to sleep, it takes a good while to be able to stretch my calf back out to be able to "walk" on it.  It sucks.  Tomorrow makes a full week since my incident and I have used a crutch(s) at some point every day, these past couple of days being sparse with crutch use.  Hopefully I can discard them soon and get back to normal, I am ready to ride again dang it. 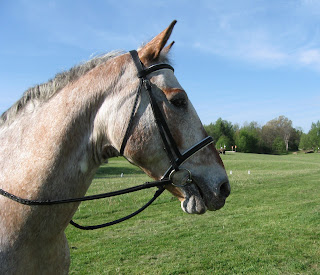 This past weekend the App had his cross country schooling and eventing derby, my instructor was kind enough to ride so that I didn't lose my entry fees.  On Saturday we brought the App over to the grounds around 4p and I got to follow them in a golf cart.  He didn't give me much to talk about as she didn't push him or try to have a good time with him, she was just seeing if he would go over the fences for the show.  He was very good and only "stopped" once, the instructor said he was speeding up so she half halted him and his hind legs slid in the slippery footing so he slowed down and so she then didn't push him over the fence.  She represented the fence and he went over without even glancing at it so I will chalk it up as it went how she said it did.  He went over everything else without an issue and only galloped on her once.  We went home, I put some liniment on him, gave him the first bath of the year (FILTHY HORSE!!) and threw him in his stall to stay clean. 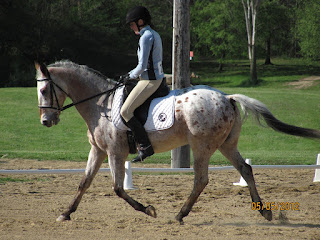 Sunday we got up and loaded at 815a, the show was packed this year.  I would say there was a 50% increase in entries over last year and as a result it took us a while to find a place to park.  Dear people in cars, please do not park oddly, at an angle, right next to a horse trailer, right behind a horse trailer or a car and a half away from the next vehicle.  It makes it extremely difficult to fit the horse trailers in the fairly small area for horse trailers when 5 spots are taken up by 2 cars due to how they are parked.  Grrr. 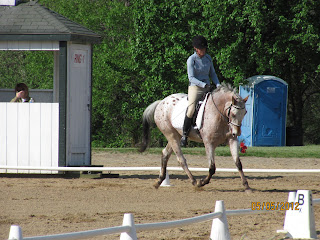 The instructor came and got the App about 30 mins before her class with the expectation that she would have what she had, if he was a rock star great, if he wasn't then she wouldn't be able to change it.  Thankfully he was a Rock Star and he rocked it.  He looked really nice in his dressage test and was calm and relaxed the entire time and didn't scream for anyone even once.  When the cross country phase was up, I put a new cross country bit in.  He normally has a slow twist D ring that has only one and a half twists, I bought a slow twist loose ring as it has more twists so it is just slightly harsher for more whoa power.  During cross country there are times you really need the extra whoa and since he only wears it during cross country I don't feel bad about having a harsher bit.  I remember last year we had NO brakes. 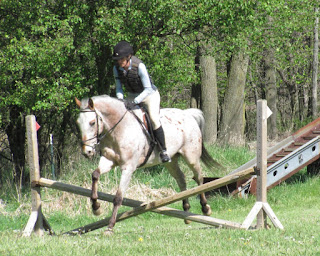 The App warmed up great and jumped well, went on course and had a great time.  Unfortunately I didn't get to see most of it as it was through the woods but I was told it went very well.  We untacked, wrapped and hung out until they read the scoring.  Since the instructor had only ridden the App for a total 15 mins before this weekend, I was hoping for a top 5 placing out of the 11 competitors. 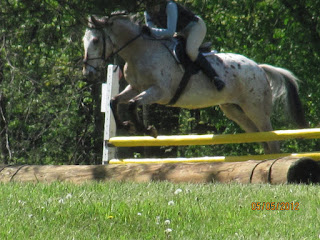 When they started reading the placings I was excited when he didn't get fifth or fourth.  I was cautious when he didn't get third and I was dumbfounded when he didn't get second and literally hung my mouth open when they read my App had gotten first place!!  He even scored a 23.5% and got that score from an actual dressage judge, that is the best score he has ever gotten!  It was very bittersweet as he really was a rockstar and I would have LOVED to have been able to have done that with him but am thrilled he showed what he can do.  The trainer also gave me information that means more than the ribbon, she said I have made him a well-oiled cross country machine and that I have done a good job with him.  Considering he has never been professionally trained and I have never taken regular lessons, I take that as a huge compliment considering my knowledge of her as a trainer. 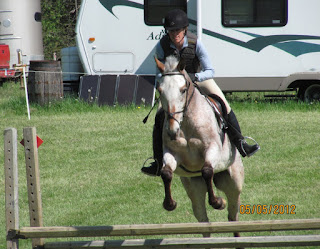 I am still on cloud nine, the rest of Sunday my friends kept laughing at me because I would stare into space with a stupid smile on my face as I thought of my App.  I am so proud of him and how far we have come, my only regret is we didn't make the transition to cross country 5 years earlier because I think he could have went far.
Posted by appydoesdressage at 7:44 AM